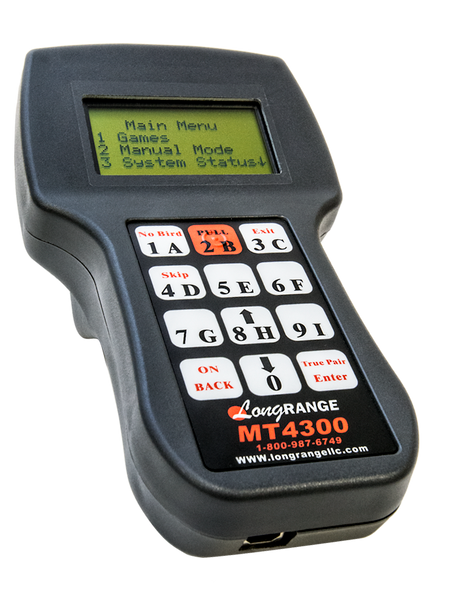 The MT-4300 can operate 15 traps on each of 255 channels. each channel is a different frequency so will not cause interference on adjacent fields.
Power by a small Lithium-Ion battery, which can be charged by either the included wall transformer or by connecting to a USB port on a PC. On a full charge, the unit will throw about 50,000 targets. Includes an on-screen battery level indicator.
5 Stand or SportTrap (UK)
6 Different menus can be loaded into memory which remains even after the unit is powered off. The 6 menus can be made for different levels of difficulty depending on how you set your targets. Simply enter the number of shooters in the squad and you are ready to go.
No Bird, no problem, simply hit the "No Bird" button and the target or targets are thrown again when the shooter calls.
Easy to follow prompts on the screen show which stand is shooting and when to change stands.
FITASC Sporting
4 Menus in the FITASC section enable you to load all 4 parcour menus in one controller, for a 100 bird tournament. Screen indicators have now changed from numbers in
5 Stand to letters. On screen display also shows when to change to doubles and to change pegs.
COMPAK Sporting
In Compak unlike 5 stand you can have 6 shooters in a squad and stand 1 shoots first rather than shooter 1 in 5 stand. This is all done automatically when in Compak mode.
Again 4 different menus can be loaded into memory.
Flush/Flurry
In flush/flurry mode you can use up to 8 machines and throw up to 999 targets in a flush.
Very easy to set up, just follow the onscreen prompts.
Enter the number of traps you are using, 2 to 8.
Enter the seconds between launches, 1 to 99 seconds.
Enter the number of targets to be launched, 8 to 999.
The number of shooters, 1 to 9. Obviously, more than 9 can shoot if you want.
Manual Mode
In manual mode simply press the buttons of the traps you want to launch. for true pairs, hit the "True Pair" button select the traps you want and hit "True Pair" again to fire.
The MT4300 is also available in an extended version. This option will operate 99 traps per channel. This enables clubs to take full advantage of the functions of the MT4300 controller if they have more than 15 traps they use on one field. This is also used at clubs that have a  Quail walk-up.
TargetTag 2016
The MT4300 fully integrates with our new counter system, giving you full control over targets thrown.
Games Currently Installed.
NSCA 5 Stand. - 6 User-Defined Menus and 6 NSCA Menus preprogrammed.
Fitasc.               - 4 User Menus.
Manual Mode.
Flush/Flurry.
Compak.           - 4 User Menus.